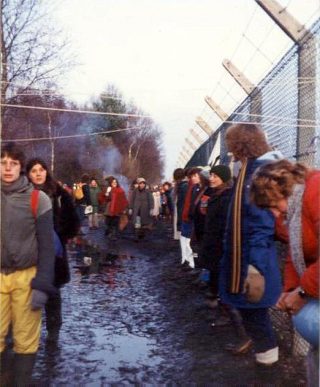 In spring 2019 we will be starting an interdisciplinary programme that responds to the specific context of Reading’s closeness to a site of Greenham Common and the Greenham Common Watchtower Museum. Greenham Common Women’s Peace Camp was a peace camp established by women to protest at nuclear weapons being sited near Reading at RAF Greenham Common in Berkshire, England. The camp began in September 1981 and was active until 2000.

Starting with a series of talks and workshops in Zurich the programme will culminate in a series of events in 2019 in Reading with screenings, talks, new commissioned participatory performances and workshops. It aspires to encourage debate and collaborations between artists, activists, choreographers, publics, curators and theoreticians as agents of change.

The project involves different stages and seeks to articulate and respond to the numerous themes, propositions and critical positions generated around notions of creative commoning and performative knowledge production. (Un)Commoning Voices & (Non)Communal Bodies: Performativity across Choirs and Choreographies looks at political and social engagement organised around a common score and how a score emerges from bodies and voices in communion. These assemblies engage tactics of social and feminist protest, notions of decolonisation and collective embodiment, thereby complicating an easy understanding of power and agency.

The first event in this series takes place in Zurich, at the Zurich University of the Arts and at Tanzhaus Zurich, and includes a talk and panel discussion with Susann Gibb & Florian Malzacher  and Workshops by Dmitry Vilensky/Chto Delat, Last Yearz Interesting Negro & Fernanda Muñoz-Newsome

The program intends to interrogate how performative scores make their way from social and political movements into art institutions, providing spaces for negotiating differences between the  ‘common(s)’ – the general interrelatedness of human realities, the ‘(un)common(s)’’ – generative destructive dynamics – and the ‘(under)common(s)’ – the less socially visible aspects of organization and interaction. We aim to ask how we participate in these collective reiterative acts, what political impact (if any) is gained, and what constitutes the conflictual realm of this imagined ‘us’?

The talks and panel discussion orientate towards curatorial strategies that emphasise performativity as a central mode of artistic production and the various expanded artistic affects and political potentials it offers. Susan Gibb’s Tobe touched, to listen: the sensorial scores of Myriam Lefkowitz and Snejanka Mihaylova shares aspects of the creative practices of both artists and their respective scoring processes that prioritise sensorial modes of perception outside of the usual contexts of representation. Florian Malzacher’s Marathons, assemblies, living exhibitions: Performativity as a curatorial strategy asks how ‘theatre-like’ strategies can enable ‘reality making’ in art, and how, as a consequence, the creation of temporary communities in performative contexts might be part of shaping social and political realities.

Workshop#1, Dmitry Vilensky/Chto Delat’s The right to represent: between exploitation and commemoration tests ethical and aesthetic questions of representation in current political art practices, through staging a participatory trial based on the case of Emmett Till, thus proposing a more complex position of empathy and solidarity.

Susan Gibb: To be touched, to listen: the sensorial scores of Myriam Lefkowitz and Snejanka Mihaylova

This talk will introduce the artistic practices of Myriam Lefkowitz and Snejanka Mihaylova. Both artists respectively create scores that prioritise sensorial modes of perception outside of usual contexts of representation. Lefkowitz uses touch, kinaesthetic and restricted vision to create augmented perceptual experiences that expand the imaginary; while Snejanka Mihaylova’s reflects on the relation between interior thought and exteriorized voice to bring an acoustic practice to bear on the space of the beholder. Through a consideration of each artists practice, the talk will propose questions about the political potentials of such shifts in proxemics and perception .

Susan Gibb is a curator based in Amsterdam, where she currently works for the performance focused arts organisation If I Can’t Dance, I Don’t Want To Be Part Of Your Revolution and teaches at the School for New Dance Development (SNDO). She is originally from Sydney, Australia, where she ran an independent curatorial initiative Society.

How can the understanding of dramaturgy, narration, process, use of space and time, the copresence of the audience etc. influence the curatorial work? How can it be used to create specific concepts, coherent projects, to contextualize differently and to foster a dialogue between artworks, artists, audiences, and society? While following J. L. Austin, Judith Butler, and others in their belief in the performative capacity to transform reality with cultural utterances, the concept of performative curating just as much emphasises the more colloquial notion of the performative as something being ‘theatre-like’, believing that those two strands are in fact interdependent. Investigating an array of staged situations, from choreographed exhibitions, immaterial museums, theatres of negotiation, to discursive marathons, and putting a special focus on theatre as assembly this lecture asks how ‘theatre-like’ strategies and techniques can enable ‘reality making’ settings in art. And how, as a consequence, can creating temporary communities in a performative context be part of shaping social and political realities?

Florian Malzacher (Berlin) is a performing arts curator, dramaturge and writer. 2013 – 2017 he was artistic director of Impulse Theater Festival (Germany) and 2006 – 2012 co-programmer of Steirischer Herbst festival (Austria). As a dramaturge he has worked with artists like Rimini Protokoll, Lola Arias, Mariano Pensotti, and Nature Theater of Oklahoma. He (co-)curated e.g. the 170 hours marathon “Truth is Concrete” on art and activism (Graz, 2012), the performative conference “Appropriations” (Ethnological Museum Berlin, 2014), the congress “Artist Organisations International” (with Jonas Staal and Joanna Warsza, HAU Berlin, 2015), and the performance series “Sense of Possibility” (St. Petersburg, 2017). His last publications include Truth is Concrete: A Handbook for Artistic Strategies in Real Politics (2014), Not Just a Mirror. Looking for the Political Theatre of Today (2015), Empty Stages, Crowded Flats. Performativity as Curatorial Strategy (2017).

Dmitry Vilensky/Chto Delat: The right to represent: between exploitation and commemoration

Zürich University of Arts (ZHdK), Toni-Areal tram station, Room 5.T09,
Friday, 2 November 10 am – 2pm and Saturday the 3 November 12 noon – 4pm
A public and performative presentation of the workshop outcomes will take place on Saturday between 5 – 7pm.

The workshop will take as its starting point the case of Dana Schutz’s painting “Open Casket” at the Whitney Biennial, as well as many other simialer controversies.

For this seminar Vilensky suggests to study not only the case of attack on Dana Schutz’s painting “Open Casket” at the Whitney Biennial but also to bring into attention other similar cases which comes from recent practices and from the history of art and mass media images. He suggests to take a position between two different approaches – exploitation of the traumas and victims and practices of commemoration and tribute to the fallen. Each of the participants will be called to take a position and advocate her view on the image – this could be expressed not only verbally but also through gestures and body language. Most of the discussed images could be related to different types of catastrophes, which raises another crucial question – does catastrophe have universal or particular characteristics? To speak about it, does one need to live through it, or can we trust any position of empathy, solidarity and truth telling? At the end of the seminar we will attempt to stage a kind of a trial in a form of a Learning Play, when we introduce and discuss certain cases and see if we can find a common ground for judgment.

Participation is free of charge but we require a commitment to stay for the whole workshop and to read this in advance: https://en.wikipedia.org/wiki/Emmett_Till

Tanzhaus-Zürich, TH1 Studio at MediaCampus, Saturday the 3 November from 11am – 4pm A potential performative presentation of the workshop outcomes will take place between 5 – 7pm  at Zürich University of Arts (ZHdK), Toni-Areal, Room 5.T09.

UNRULY BODIES FOR UNRULY TIMES – the workshop introduces our collective bodies as organisms probing the emergent spaces inside and outside skin and language that communicates new feeling and not historical meaning. As we mobilise our intelligent body-minds to rupture the flow of the everyday, we access unruliness in our thinking-bodies to make choices about sensation and pleasure as political gesture. We find ways of ‘leaking’ these choices into moving and seeing in general. What if our bodies ‘spoke’ without censoring information? What if on a cellular level we are able to collapse patriarchy through investing in the imaginative, unruly, beautiful mess of ourbodies? How could we disturb perceived boundaries between choreographic, social, verbal and intimate space? What if our speaking/mumbling/voicing bodies found power inside the ‘unformed’ or ‘non-namable’?

We are reminded of a moment in a rehearsal where a dancer said; “THIS IS NOT A DANCE, IT’S A THREAT” – Yes! If this is also a condition for a performative body, how and where do our bodies find or create intimacy and how might we then classify friendships? How do we greet these speaking-mobilising simultaneous agencies and what sense of liveness could we then be interested in exploring or even living? What is harnessed by the performing girl/earth/bodymachine in this way and how can we offer fragile oracle practices of divination for unruly bodies in unruly times? Let’s listen.

*Participants should either be professional dance artists or have a vested interest in and work with dance/movement/choreographic practice as part of their personal practice.

Participation in the workshop is free of charge via an open call. If you would like to participate please email a short paragraph about why you would like to join and a short narrative bio to sl_spies@yahoo.co.uk before 20 October. Places are limited and we will respond to you by October the 27th.