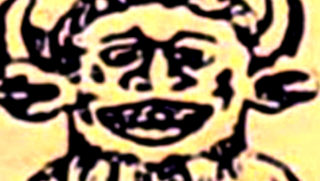 Reading International present the latest iteration of Steven Warwick’s mutating Mezzanine series, The Riddle of the Imp on the Mezzanine (My Journey). Part platform as performance, part live event Warwick reflects on how forces of social evil, religious retribution and redemption manifest in popular culture and folklore; be it in the Lincoln Imp, Pinhead from Hellraiser or popular literary sleuths such as Poirot.

‘The Riddle of the Imp on the Mezzanine’ is a sonic performance that will comprise of text and spoken word within a unique site-specific installation situated within the bowels of Broad Street Shopping Mall, a ritualised site, symbolic of commercial exchange and social demographics. It will be the fifth episode of NOVEL’s year-long publishing and curatorial project A reproduction of three weeks in May 1970, the final episode will feature Helen Cammock and will take place in March 2019.

Warwick’s practice is paradigmatic of an interdisciplinary approach that encompasses DJing and theatre-making along with art, music and writing. His work is disseminated on a multitude of platforms including records, galleries, nightclubs, publications and the Internet. Across these contexts, Warwick creates assemblages of performance, image, sound and language that speak to the ways in which ideologies construct and inhabit spaces, online and offline – from co-working spaces to clubs, television shows and online chat rooms. In its pluralistic live forms, Warwick’s work redefines the expectations and conventions that accompany events such as concerts and public lectures

He also has recently presented a series of ‘Mezzanine’ projects, including a  musical performance series choreographed with dancers. Other collaborative projects include ‘Elevator to Mezzanine’ (with DeForrest Brown Jr), together they have produced exhibitions, a look book and recently a Western musical titled ‘Performing America (Iconic America)’, and the audio-visual performance-lecture series ‘Fear Indexing the X- Files’ with writer Nora Khan, recently issued as a book by Primary Information, with excerpts published by NOVEL.

Steven Warwick will present an alternative iteration of The Riddle of the Imp on the Mezzanine as part of the Stanley Picker Lecture series at the ICA, London on Thursday, 7 February 2019.