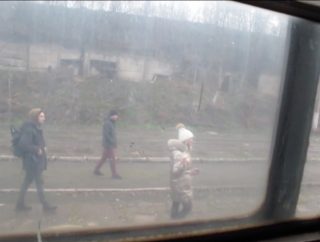 The starting point was a tragedy that took place in 1996 in the city of Dniprodzerzhynsk (now Kamianske). A KTM-5 tram running along the № 2а route suffered a breaking system failure on a steep slope, resulting in the deaths of 34 people, with more than 100 people injured. The story inspired the artists to conduct an ‘investigation’.

This video piece documents their arrival at the tragedy’s location. Their aim was to take photos, but the director of the tramline depot did not grant them access. The video documents the brief discussion with the director and moments of reenactment.

Vania vs Landscape by Yaroslav Futymskyi

“The video portrait of my friend Ivan Marinych dissolves in the car noise and the surrounding landscape, a portrait of the working class without the tradition of class struggle or trade union activity, eternal silence in return for exploitation, the hum of cars instead of slogans and demands, a peripheral landscape that exists between sentiments and exhaustion.” (Yaroslav Futymskyi)