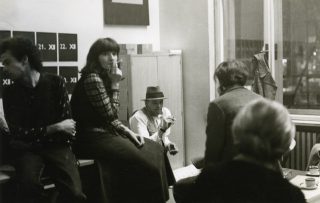 In this talk Lina Džuverović explores ways in which the university could be imagined as a public arena, one which opens its life beyond the academic community, actively engaging a wider public. Could we imagine the university acting as a catalyst and creating a speculative public thinking space, erasing hierarchical (and monetary) divisions between the educational environment and wider publics? What would a model for such a public arena look like?

The talk draws on a particular historical precedent of one of the best-known university-affiliated cultural centres in Europe: Belgrade’s Students’ Cultural Centre (SKC), which remains active today (although no longer under the auspices of the University). The talk focuses on its inaugural programme of 1971, using it as a model to imagine such a space. In this talk we will imagine what it would mean to apply this model to our own local context today.

Lina Džuverović is a curator and Lecturer at the Reading School of Art, University of Reading. Previously she was Artistic Director at Calvert 22 Foundation (2011–13), Director of Electra (2003–2011), and has held curatorial roles at Momentum, the Nordic Biennial of Contemporary Art (2009), ICA London and the Lux Centre.