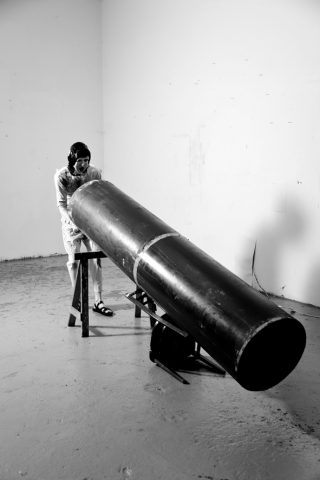 Alastair MacKinven’s Eggy and Seedy went live on the Reading radio station Blast 1386 on Tuesday 11 April 2017 to reveal a narrative involving a romantic relationship between two historical land artists. This new work originates from two previous performances by MacKinven that connect processes of entropy, regeneration and remaking – All of the things that you could be by now if Robert Smithson’s wife was your mother (2006/7) and When the Schtick Hits the Fan (2009) – that form an ongoing critical plot in the artist’s work.

Interestingly, the artist was asked to present a birthing ceremony by a midwifery hospital in Manchester after the clinic misunderstood his initial actions as practical presentations instead of symbolic rebirths, a misinterpretation that led to the artist’s plan for his radio play in Reading, which in part connects to the initiation of a new contemporary art festival in a regional location with a burgeoning cultural scene.