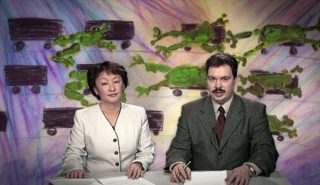 ‘Birmingham Ornament’ consists of various fragments based on texts by Yuri Leiderman acted out by different characters such as two “TV announcers”, an “Odessa chanson singer”, a “Berlin street philosopher” etc. This fictional line is interwoven with fragments in which Yuri Leiderman’s father talks about his family’s ordeals during the years of the Second World War.